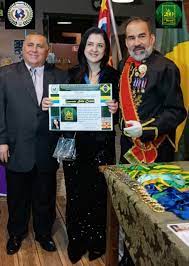 On October 25th, in Iracemapolis SP, there was a night of tributes celebrating the 200th anniversary of the Bicentennial of Brazil at the charming PUB Secret Garden.

The event was fully promoted by Dr.Camilo Martins and Barão Ednei Pereira President of the Section of the World Academy of Letters of Humanity – AMLH in the Section of Iracemápolis – São Paulo/Brazil.

Barão Ednei has been dedicated to culture, arts and literature with a vast curriculum in the academic area and royal institutions, having many noble and honorary titles. Archduke Bachelor of Laws led an exciting evening with several Brazilian personalities.

The highlight of the night was the World Art Show Gallery and Organization that promotes Brazilian artists, directed by journalist and businesswoman Sula Costa, who has been established in São Paulo since 2017, with a strong presence in the communication area as a correspondent for the NaMidia portal, directed by by Uiara Zagolin, Life Fashion Magazine from New York and currently the International Correspondent of Revista CBTur, the magazine has a digital reach with cosmopolitan social media and has 2000 prints as part of the advertiser's own portfolio.

In just a few years Sula Costa has one of the most notable art galleries on Avenida Pacaembu 1849, in one of the most exquisite architectural spaces in this sector in São Paulo. The World Art Show gallery established at Espaço Ortobom Arquitetura e Design whose owner, entrepreneur, DIogo Roque, who has been one of the journalist's biggest supporters since arriving in São Paulo. His project at the World Art Show gained prominence in Forbes in London and in the Brazilian Times in New York for creating a Sala Jardim Botanico in honor of the landscaping projects of Robert Burle Marx. A permanent environment in Espaço Ortobom, which ended up being very frequented by plastic artists and collectors who live in São Paulo.

Journalist Sula Costa, born in Anápolis, GO, studied Marketing, Advertising and Journalism. In NY, he worked with international film production companies, Organizations of Research Institute in Preservation of the Environment at the UN. He studied TV production in California, graphic design and photography in NY. He worked on restoration, construction and intervention projects, cultural planning for Brazil. Covered the main economic events in Brazil in New York; worked as an international correspondent for the journalist Gilberto Amaral, in addition to working with Public Relations at Casa do Brasil Internacional in New York.

She is Executive Director of Costa Consulting, a consultancy and cultural promotion company in Brasilia, and World Art Show in Sao Paulo, a company that supports visual art in Brazil.

Iracemápolis has its first World Academy of Letters of Humanity and brought together secretaries of Industry and Commerce, authorities. cultural managers and health professionals, bringing the exchange of cultural and literary experiences with the intention of revitalizing the legacy for future generations.

The tributes paid at the event were for outstanding professionals who contribute to promoting cultural and business exchange in Brazil. An impeccable event making for a joyful evening with drinks by Scottish Chef Andrew Kinniburgh, owner of the local space.