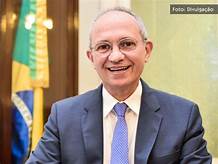 The Brazilian-American Chamber of Commerce of Florida and the BACCF Banking & Finance Committee promote a Webinar presented by Paulo Hartung.

The experienced economist will bring the topic of discussion: “Brazil”: Conjuncture, Contexts and Perspectives Post Pandemic.

Paulo Hartung holds a degree in Economics from the Federal University of Espírito Santo (UFES). When he was a student at UFES, Hartung was elected the first president of the Central Directorate of Students (DCE) of the University. The economist won the mandate of Federal Deputy (1991 to 1995), with the largest vote within the Municipality of Vitória, capital of the state. His relevant performance made him assume the position of deputy leader of the Brazilian Social Democracy Party in the Chamber of Deputies, whose leadership was exercised by José Serra, then a deputy for São Paulo.

The webinar will be guided by the issues that most drive an economic crisis in the current situation of the pandemic crisis COVID 19:

Posted by Sula Costa at 6:32 PM No comments: