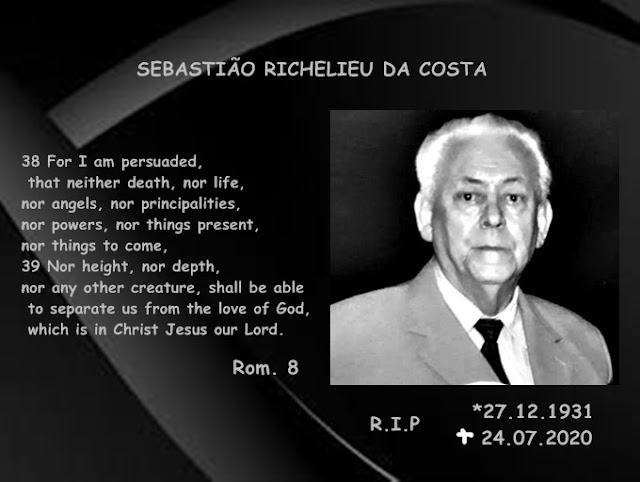 A note of regret: It is with deep sadness that we communicate the death of the lawyer - Dr. Sebastião Richelieu da Costa, affectionately known as Gegê.

Dr. Sebastião Richelieu was a great collaborator in the opening of the consulting company Costa Consulting Co, based in Brasilia - DF and New York - NY, directed by his daughter, journalist Sula Costa.

Dr. Sebastião, one of the successful legal professionals in the State of Goiás, worked in the tax area, in defense of the main companies that are the basis of the regional and state economy of the Brazilian Midwest. In addition to acting for more than 20 years as a director of SINDIFISCO AFFEGO in Goiânia - GO, where he established his legal career in parallel with the tax audit of the State of Goiás.

He acted strongly as Sports Secretary at Anápolis - GO, in the management of the late mayor Jamel Cecílio.

It was extremely important in the foundation, formation and integration of Anápolis Futebol Clube, “O Galo Tricolor”, Anápolis football team, which was truly worshiped.

Sebastião Richelieu da Costa leaves his partner Terezinha Maria de Souza, with whom he lived for 47 years, in addition to six children, 18 grandchildren and 5 great-grandchildren.

Dr. Sebastião Richelieu was a victim of kidney failure, a disease he had been facing for three years.

We couldn't have said it better, Sula. This year is our absolute last chance to defeat map-manipulating Republicans and elect Democrats who will fight for fairness during redistricting next year.

And with just three months left until Election Day, time is running out.

Can we count on you to end gerrymandering and make fair maps a reality?

"One of the biggest threats to democracy is indifference. In fact, the folks who manipulate and distort electoral maps depend on the inaction of voters."

We can't be indifferent, Sula, not when so much is on the line. Will you take this last-chance opportunity to join the fight for fair maps today?