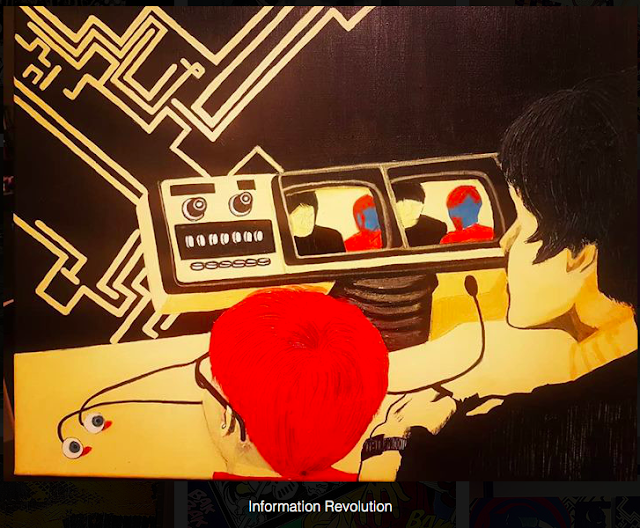 Collage photograph of an acrylic self portrait on fiber-board, with a cross-section of left side of brain lithographed on xuan paper with digital clip art on top.

This piece is a lament to the establishment’s attempt at smothering and covering what essence truly makes up one’s humanity. The relatively small self-portrait is visually under attack from the monstrous cross-section of the left hemisphere of the brain. The left hemisphere of the brain is poignant, because our world has monopolized its trust within the bastion of science and logic, where there is so much that cannot be quantified appropriately (nor should it) under the empirical verification that science perpetrates. The juxtaposition of the self-portrait within the centre of the brain, is to re instate the human at the ‘centre’ of our endeavours, and not to let the cold, non-comprehensive unity that science sells as a wholistic semblance of truth. The fragility of the self portrait, is also its strength, as even though there is an imposing atmosphere of calculations and utter lacks of humanity, the portrait still remains solid and whole at the centre, to remind and reinforce to the audience that even though the institutions of society may always seem to have a stranglehold on reason, morality, ethics, etc, is because science (a patriarchal mechanism of societal control) says it to be correct. Along with the scientific shackles that the large left hemisphere cross section invites, the traditional zeus bolts, to show how the divine is also trying to maintain its hegemony on the human psyche, and that intense barrage of these powerful cultural and societal mechanisms that aim to control and incite harm. Hatred and confusion to prevent one from truly coming into one’s own humanity. Reading Starhawk’s essay on wicca and how before Wiccan culture was eradicated by patriarchal efforts, with it went the last time Women had any real power or influence in western society. This is illustrated in my work as the left hemisphere signifies the scientific revolution, and the dismissal and disposal of the wisdom, beauty and utter HUMANITY that Wiccan covens believed in. Science has made so many great things possible, but this piece makes us question science’s austere agenda, by asking accountability from the murderers it has committed to other, equally valid, methods of epistemology. What makes us truly human, like the supreme universe that created us, may try to be eradicated by science, but no matter its aimed attempts, the divinity of our humanity will always elude the insidious and controlling umbrella of the scientific method,

The divine cover-up encourages the notion of the scientific, left-brained, cold, logical and anti-human establishment literally trying to 'cover-up' and blot-out the true essences of humanity and the human condition.

Doctor is a reminder to the audience, that doctors are not champions of medicinal justice or epistemology, but rather another mechanism of bourgeoisie control. As the doctor bears a "ruff" (a frilled collar from the Renaissance period in Europe), indicating his bourgeois nature, and a look of confusion and indecision and unknowing. These doctors, symbols of the maccabre nature of medicine in the dark ages, were despairing reminders of death and suffering, as they stoically tended to sick masses, but in reality, they were snake oil sellers of overpriced medicine that only the rich could afford. This obvious socio-economic mirror to the past shows that if you don’t remember your history you are bound to repeat it.

The Earth is Plagued by Ignorance aims to educate the reader on the fact that overpopulation in any relative sense, will bring about a levelling, or balancing. Like more people spending more cash, this is a rebuttal, as Bill Gates said the biggest problem that our global population faces today is OVER POPULATION, as we face the same overcrowding and disease that people faced in Europe and Eurasia in the 1300s. This recounts the many plagues, both natural and manmade, that indelibly played a part on our cultural, biological, and social evolution. More than a remembering of sickness, and death that has forced western Civilization to the brink of extinction, it also warns that these same plagues are not mystical maladies of fairytale and fiction, but a very real, and very poignant reminder that we are ;plagued; today with staph infections, antibiotic resistant bacteria, and worldwide flu epidemics, all it takes is one domino to take us back to the time humanity was subdued by a rat.

War.
While I was in Netherlands,  I visited The Hague, and there I was asked to photograph of an ex soldier from WWII. He was wearing a Superman shirt, and saluting me because I was a Canadian. When I got back to Canada I glued a piece that I had lithographed onto xuan paper in 2013 to an 8" x 11" birch canvas. I then traced the photograph of the man on trace paper with Sharpie and adhered it over the print.

This piece speaks about WWII and the loss of lives as a result of war. It is another form of population control that fuels the economy of a country like the United States, who glamourizes war.It speaks about the government and their need for consumers to spend money in the global market no matter what is going on at the times.

The poppy symbolizes sleep, peace and death and is a symbol of remembrance in Canada, for our fallen veterans, who seem to be forgotten too as they are meant to survive off of a wage that hardly pays their rent.
The quote on the bottom comes from a newspaper title from the Calgary Herald in 2016.

This piece is called Z.I.P. and it is a representation of my own internal struggle in 2016-2017. It discusses war and the glamorization of it through Popular Culture. The comic style is aimed toward children and the innocence of the toys are used to discuss the reality of war and its consequences. Alcohol, gambling, sex, drugs, cigarettes are all glorified in war movies. These movies are owned by rich people who are programming us to resort to violence. Actors put on a mere puppet show for society who are seen as pawns  for the rich who enjoy trying out their new toys on humanity. This piece is literally like a travelling circus, or sideshow as it is in a suitcase. The reason has to do with the history of the displacement, or subtle movement of people, as a result of the Industrial Revolution, which revolutionized transportation.

Brainsai discusses the flaws of a Western inspired education system.
Having your neck in this position is very vulnerable, it is almost sexualized and submissive to the pruner or binder (teacher). I was not diagnosed with ADHD until university and I was convinced I was not good enough because I did not fit into the mould that society had cast for me. It is inspired by the Chinese and their bonsai trees, which are pruned and bound to fit a certain criteria in order to be considered a bonsai tree. This lithography print is on Stonehenge paper, and is a representation of the problems that plague the West, where kids are taught to grow up far too fast and they and losing their imagination and uniqueness because of it.

This piece is called Lead By the Hand that Feeds (2016). It was drawn in pen and then lithographed onto xuan paper, which was then Chine-colléd onto Stonehenge paper. This piece speaks about Capitalism and the rich puppeteers that decide the fate of everyone. The gears are like that of a well oiled machine cloaked in a mask with a cage-like mouth. Money fills his eyes while the outcast perches on his left eye, carefully avoiding his line of site. I have questions burning but a media that is owned by rats that hijacked any chance people had left for freedom.


has always been a powerful trope within, before, and I’m sure after my life. I recently found out that my Lebanese family had worked with the CIA in 1975, which was exciting because I always had a penchant for finding out the grey areas, the back alleys, and


particularly influenced this piece, as the father and son are being watched by the seemingly banal video cameras, painted as eyes to show the dualistic nature of the conveniences we all enjoy. Technology has brought us modern magic in the form of handheld
supercomputers that run our everyday lives. We think this Data stream is one way, but as we well know with recent Facebook scandals and FBI watching-through-webcams buzzing about, Orwell’s warning is all to real, save 24 years after.