The event will be happen out in November 7th at TONY'S RESTAURANT, to the 19hs, at Orlando - Florida.

The initiative of the direction of the World Art Show, which is established at Sao Paulo in the Ave. Pacaembu 1849, happened since the group of co-ordination of the enterprise what they work with research and development of projects of arts for the United States, knew the Non-profit organization, People Who Make A Difference, established by the businesswoman Márcia Romero, what there are 8 years works on behalf of the Brazilian community, besides answering, including citizens Hispânicos and Americans.

They have the organization if unfolded in a work of support to the population that has not Plan of Health and is a bearer of chronic disease. Many people need medical proceeding in the United States and face many financial obstacles.

Besides attending approximately 6000 families during these years, the Non-profit organization does an impeccable work in visits to the local community with the purpose of instructing and giving financial support to that which they need to restore his health with some type of treatment or medical proceeding which are very expensive.

The director of the enterprise World Art Show - Sula Costa, affirms that a relevant project as that one certainly will have the support of the artists accredited in his project for a charitable auction at least once to the year.
Besides artists who already have his works established in the Flórida/EUA, the plastic artists, established in Sao Paulo, will be the guest of honor because of having donated voluntariamente work for the realization of the event in the USA, which already have the date marked for the famous day of Thanksgiving (Thanksgiving). 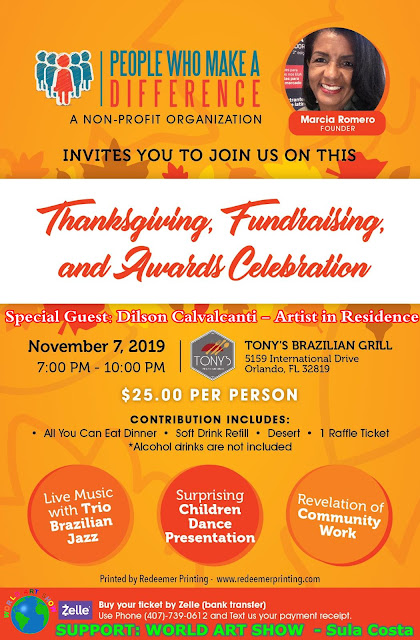