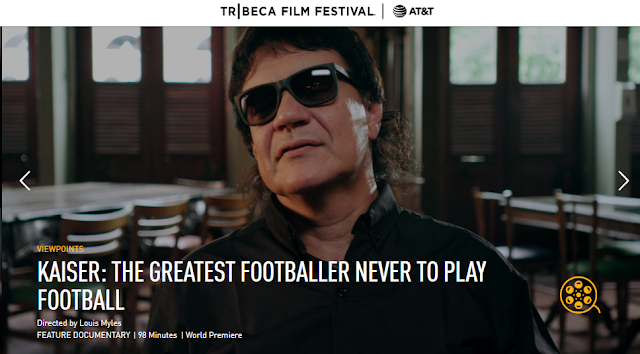 In Brazil in the ’80s, soccer superstars had it all: the adoration of millions of fans, the frenzied attention of the world's sports media, and all the glamor Rio de Janeiro's nightclubs had to offer. But among the ranks of the country's elite athletes, one of the biggest sports celebrities of his generation harbored a secret: He had never played a single game.Weaving together tales of fake injuries, of gangster club owners, and of Rio's steamy nightlife scene, Louis Myles's rollicking documentary uncovers the stranger-than-fiction double life of Carlos "Kaiser" Henrique Raposo, a self-styled football V.I.P. whose 26-year club career spanned continents and some of Brazil's most famous teams—even though he never set foot on the pitch. A stylish, celebratory, and surprisingly sensitive look at the man behind the myth, Kaiser revels in unraveling the half-truths and alternate realities behind of one of the biggest fraudulent stories in the history of sports. —Ian Hollander
More information: https://www.tribecafilm.com/filmguide/kaiser-the-greatest-footballer-never-to-play-football-2018

"International Import & Export sector fair." China Import and Export Fair, also known as the Canton Fair is held biannually in Guangzhou every spring and autumn, with a history of 59 years since 1957. Canton Fair is a comprehensive one with the longest history, the highest level, the largest scale, the complete exhibit variety, the broadest distribution of overseas buyers and the greatest business turnover in China. It attracts more than 24,000 China's best foreign trade companies with good credibility & sound financial capabilities, and 500 overseas companies to participate in the Fair. It is a platform for import and export mainly with various & flexible patterns of trade. Business people from all over the world are gathering in Guangzhou, exchanging business information. Product showcase at Phase 3 includes Textiles & Garments, Shoes, Office Supplies, Cases & Bags and Recreation Products , Medicines , Medical Devices and Health Products, Food and International Pavilion.

SYNOPSIS
The night-club Gato Tuerto is surely the most symbolic Cuban cabaret. For 55 years, it has been the refuge of the so-called intellectual bohemia in Havana. Cuba’s most important musicians have been on it’s little stage, such as Omara Portuondo, Pablo Milanés, César Portillo de La Luz, Meme Solis, Elena Burke, Juana Bacallao and Chucho Valdés, among others, and has been the stage for the world’s largest bolero, being registered in record book Guiness. The documentary tells the story of this cabaret, it’s founders, artists and clients, such as Gabriel Garcia Marques, Caetano Veloso and Julio Cortázar. The café-concert is actually a backdrop to recover the history of Havana’s cultural and night life in over five decades – with all its good and bad times.
Español

The Museum of Modern Art
Every two years, MoMA’s celebrated New Photographyexhibition series presents urgent and compelling ideas in recent photography and photo-based art. This year’s edition, Being, asks how photography can capture what it means to be human.
At a time when questions about the rights, responsibilities, and dangers inherent in being represented—and in representing others—are being debated around the world, the works featured in Being call attention to assumptions about how individuals are depicted and perceived. Many challenge the conventions of photographic portraiture, or use tactics such as masking, cropping, or fragmenting to disorient the viewer. In others, snapshots or found images are taken from their original context and placed in a new one to reveal hidden stories. While some of the works might be considered straightforward representations of individuals, others do not include images of the human body at all. Together, they explore how personhood is expressed today, and offer timely perspectives on issues of privacy and exposure; the formation of communities; and gender, heritage, and psychology.
Exploring new ground and the many forms that the photographic image can take, New Photography is a key part of the Museum’s contemporary program. Since 1985, the series has introduced new work by over 100 artists from around the world. In 2018, Being brings together an international group of 17 artists at various stages in their careers, all presenting their work at the Museum for the first time.
The artists included are:
Organized by Lucy Gallun, Assistant Curator,
More information: https://www.moma.org/calendar/exhibitions/3886
7:30–10PM
DOORS 7:30PMPERFORMANCE 8PMADVANCED $35DAY OF $40THIS SHOW IS A GENERAL ADMISSION SHOW.
PRESENTED IN ASSOCIATION WITH EULIPION SOUNDS
Tom Zé is a songwriter, multi-instrumentalist, and composer who was influential in the Tropicália movement of 1960s Brazil. After the peak of the Tropicália period, Zé went into relative obscurity: it was only in the 1990s, when the musician and label head David Byrne discovered an album recorded by Zé many years earlier, that he returned to performing and releasing new material.

A graduate of the University of Kent’s prestigious Drama master’s program, Louis Myles has worked for 15 years as a creative director in television and advertising, where he developed a reputation for crafting beautiful visuals and well-told stories. Kaiser is his first feature-length film.
Posted by Sula Costa at 6:02 PM