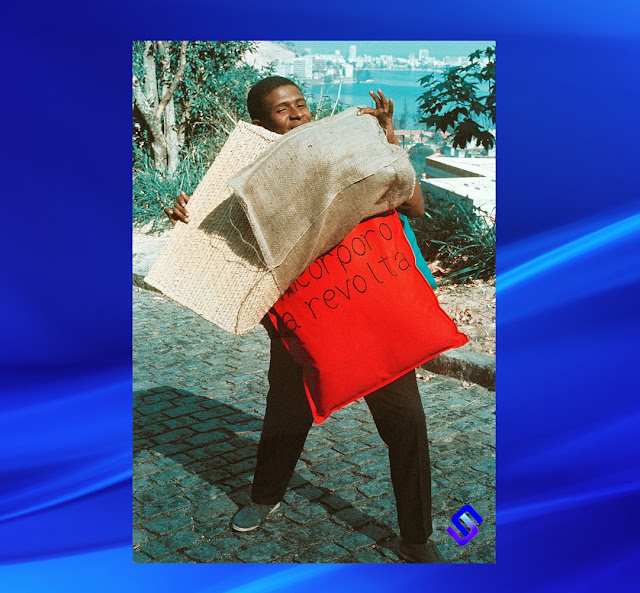 Hélio Oiticica: To Organize Delirium is the first full-scale U.S. retrospective in two decades of the Brazilian artist’s work. One of the most original artists of the twentieth century, Oiticica (1937—1980) made art that awakens us to our bodies, our senses, our feelings about being in the world: art that challenges us to assume a more active role. Beginning with geometric investigations in painting and drawing, Oiticica soon shifted to sculpture, architectural installations, writing, film, and large-scale environments of an increasingly immersive nature, works that transformed the viewer from a spectator into an active participant. The exhibition includes some of his large-scale installations, includingTropicalia and Eden, and examines the artist’s involvement with music and literature, as well as his response to politics and the social environment. The show captures the excitement, complexity, and activist nature of Oiticica’s art, focusing in particular on the decisive period he spent in New York in the 1970s, where he was stimulated by the art, music, poetry, and theater scenes. While Oiticica engaged at first with many of the city’s artists, he ended up living in self-fashioned isolation before returning to Brazil. He died in in Rio de Janeiro, in 1980, at the age of 42.
This exhibition is organized by the Whitney Museum of American Art, New York; Carnegie Museum of Art, Pittsburgh; and the Art Institute of Chicago.
Hélio Oiticica: To Organize Delirium is curated by Lynn Zelevansky, Henry J. Heinz II Director, Carnegie Museum of Art; Elisabeth Sussman, Curator and Sondra Gilman Curator of Photography, Whitney Museum of American Art; James Rondeau, President and Eloise W. Martin Director, Art Institute of Chicago; and Donna De Salvo, Deputy Director for International Initiatives and Senior Curator, Whitney Museum of American Art; with Katherine Brodbeck, Associate Curator, Carnegie Museum of Art.
Support for the national tour of this exhibition is provided by The Andy Warhol Foundation for the Visual Arts and the National Endowment for the Arts.
In New York, major support is provided by the National Committee of the Whitney Museum of American Art.
Generous support is provided by Art&Art Collection, Tony Bechara, the Garcia Family Foundation, and the Juliet Lea Hillman Simonds Foundation.
Additional support is provided by the Evelyn Toll Family Foundation.
Generous endowment support is also provided by The Keith Haring Foundation Exhibition Fund.Whitney Museum of American Art99 Gansevoort StreetNew York, NY 10014(212) 570-3600info@whitney.org 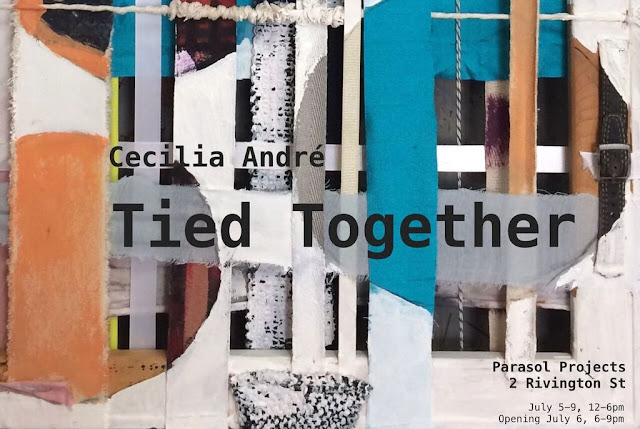 Cecilia André - Tied TogetherCurated by Nina Gomes and Katia Gerlach
Exploring the boundaries beyond canvas and material, Cecilia André weaves the seer into the void and transforms remains in a process of ceaseless renewal. As the seer, you delve from the past to the future and benefit from a sense of infinitude.   Not so fixed in the now, André connects time dots, front and back, before and after, shadows and grids, wood and cloth in an avant-garde approach to the potentialities of matter. André is the old weaver dealing with contemporary fables.  The artist invites not only the eyes but the whole body to float, transit, experiment in the role of a moving being through spatial ruptures. Beware: these elaborate frames not only resuscitate objects otherwise in decay, they actively redeem. Such redemption being the sole route to perpetuating a not merely mythical humanity....Cecilia André is a Brazilian painter, with a BFA and a BAE from Armando Alvares Penteado Foundation, in Brazil. She has been living in New York for the past 25 years, where she studied in art programs at the New York Studio School, Pratt Institute and School of Visual Arts.
The artist has shown in important museums in Brazil, where she was represented by Adriana Penteado Contemporary Art Gallery for 17 years. In the U.S., she has shown her work at different venues in New York, including a solo exhibition curated by Kazuko Miyamoto at Gallery OneTwentyEight, and participated in four editions of the NYC Figment Arts Festival. Outside the city, André held exhibitions in Saint Louis MO and South Orange NJ. 2 Rivington StJuly 5-9 / 12-6pmOpening Night: July 6 / 5-9pm


What:  GNR Presents: a multimedia collective show that brings together a wide range of works representing the gallery
Where: Galerie Nara Roesler (Manhattan)
When: July 7 – September 1

Galeria Nara Roesler | New York is delighted to announce GNR Presents:, a multimedia collective show that brings together a wide range of works representing the gallery’s remarkable position as a leading Brazilian contemporary art gallery with 30 years of experience in the Global South, yet whose presence in the North spans barely two years. The exhibition encompasses the gallery’s twofold mission to promote Brazilian art abroad while actively contributing to the internationalization of the Brazilian art scene through a rigorous international program. A series of talks and workshops at the gallery and throughout New York City has been organized to accompany the exhibition.
GNR Presents: convenes a cross-generational group of artists, from the Global North and South, whose works reflect on formal concerns such as the role of color, spatiality, and the public. Presenting works by seminal Brazilian artists such as Hélio Oiticica, Sérgio Camargo, Lygia Clark, and Tunga, the exhibition also showcases works by key international artists who similarly experiment with space and perception, including Daniel Buren. In addition, it features works by young and up-and-coming artists who share these formal concerns, namely Bruno Dunley and Eduardo Navarro. While the former’s body of work considers the representational language inherent in painting, the latter’s participatory action projects activate the audience’s presence. GNR Presents: also subtly reflects on the concept of a Global North and South in its presentation of pieces by Latin American artists Vik Muniz and Alexandre Arrechea, who pay tribute to New York City in their depictions of iconic buildings including the Guggenheim Museum and the Chrysler Building.

Color extends as a thread throughout the exhibition, establishing a spatial and physical presence, which fosters corresponding relationships between works. While some artists visibly yield color on flat surfaces to reflect on form in space, others present similar strategies in three-dimensional fields. For instance, Hélio Oiticica’s paintings Metaesquema (1957–1958) and Lygia Clark’s Planos em Superficie Modulada (1957) are monochromatic sketches of geometric shapes that create an interplay between figure and background. These works challenge their own two-dimensionality by evoking a sense of instability, movement (as in Oiticica’s work), and depth (as in Clark’s.) Oiticica achieves these effects by partially applying a rhythmic “mirroring” strategy, whereby he replicates his patterns. Daniel Buren’s installation, Prisms and Mirros: High Reliefs (2017)follows this line of experimentation by seeking to enhance light and color through spatial arrangements, while going further by allowing the viewer and his space to become active participants in the work.

Another correspondence takes place between Abraham Palatnik’sUntitled (2016) and Tunga’s Untitled (1999), the latter of which pertains to the artist’s “Scalp” series. Both works test the cognitive capabilities of fragmented media, yet Palatnik accomplishes this by juxtaposing the pictorial potential of the wood with that of paint, while Tunga assembles pliable threads of brass so as to evoke hair held by combs. Also on display is Sérgio Camargo’s Untitled #268 (1970), whose white sculptural relief interacts with the minute systems in Marco Maggi’s Language in Residence (2016). While Camargo’s work straddles he polarity of surface and sculpture by allowing light to shine on the smooth forms that lie within the wood, Maggi’s reveals a system within minutely low reliefs.

Please join us for our Summer Events and Summer Drinks on Friday, July 7, from 4pm to 7pm, to celebrate the opening of GNR Presents:.